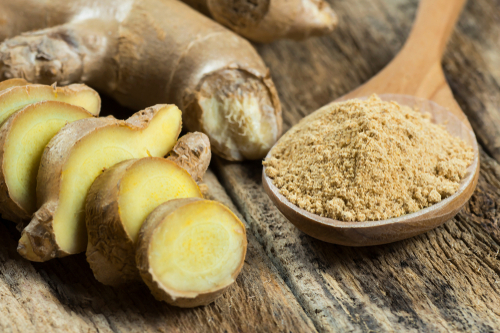 Ginger Is Good For Your Health

The idea that ginger can help with some light tummy trouble isn’t new. In fact, research has linked multiple digestive benefits to ginger, specifically acting on parts of your GI tract responsible for feelings of nausea, stomach upset, and vomiting. It may also help move food from the stomach to the small intestine for digestion and absorption. That said, ginger cannot prevent food poisoning or counteract ingestion of a harmful substance, so contact your physician ASAP if something requires urgent medical attention.

Ginger (Zingiber officinale Rosc.) belongs to the family Zingiberaceae. It originated in South-East Asia and then used in many countries as a spice and condiment to add flavor to food. Besides this, the rhizome of ginger has also been used in traditional herbal medicine. The health-promoting perspective of ginger is attributed to its rich phytochemistry. Jolad et al. grouped fresh ginger into two wide range categories, i.e. volatiles and non-volatiles. Volatiles include sesquiterpene and monoterpenoid hydrocarbons providing the distinct aroma and taste of ginger. On the contrary, non-volatile pungent compounds include gingerols, shogaols, paradols, and zingerone. Ginger has staring potential for treating a number of ailments including degenerative disorders (arthritis and rheumatism), digestive health (indigestion, constipation and ulcer), cardiovascular disorders (atherosclerosis and hypertension), vomiting, diabetes mellitus, and cancer.

It also has anti-inflammatory and anti-oxidative properties for controlling the process of aging. Furthermore, it has antimicrobial potential as well which can help in treating infectious diseases. Generation of free radicals or reactive oxygen species (ROS) during metabolism beyond the antioxidant capacity of a biological system results in oxidative stress, which plays an essential role in heart diseases, neurodegenerative diseases, cancer, and in the aging process. The bioactive molecules of ginger like gingerols have shown antioxidant activity in various modules. Inflammatory disorders such as gastritis, esophagitis, and hepatitis, which are caused not only by infectious agents such as viruses, bacteria, and parasites but also by physical and chemical agents like heat, acid, cigarette smoke, and foreign bodies, are recognized as risk factors for human cancer. Ginger consumption before exercise might reduce naturally occurring quadriceps muscle pain during moderate-intensity cycling exercise.

This effect may be due to anti-inflammatory effect of ginger and further investigation need to prove it in human. This study aimed to review the current evidence on ginger effects as an anti-inflammatory and anti-oxidative. Ginger may lower cholesterol levels High levels of LDL lipoproteins (the bad cholesterol) are linked to an increased risk of heart disease. The foods you eat can have a strong influence on LDL levels in a 45-day study of 85 individuals with high cholesterol, 3 grams of ginger powder caused significant reductions in most cholesterol markers.This is supported by a study in hypothyroid rats, where ginger extract lowered LDL cholesterol to a similar extent as the cholesterol-lowering drug atorvastatin.Both studies also showed reductions in total cholesterol and blood triglycerides. There is some evidence, in both animals and humans, that ginger can lead to significant reductions in LDL cholesterol and blood triglyceride levels.

Ginger does not provide protein or other nutrients, but it is an excellent source of antioxidants. Studies have shown that, for this reason, ginger can reduce various types of oxidative stress. The cell-protecting properties of ginger can lower the long-term risk of certain cancers. That’s because the spice and other flavorings may reduce cellular activity that causes DNA changes, cell death, and proliferation of cancer cells. It could also help sensitize tumors to treatments like chemo and radiation. While ginger’s not a cure-all for any chronic disease, using it regularly with loads of other spices and plant-based foods can help benefit health overall. The mechanism of ginger for acting as chemo preventive spice remains a matter of conflict among researchers. Ingredients like -gingerol,-shogaol, -paradol, and zerumbone in ginger exhibits anti-inflammatory and antitumorigenic activities. Ginger and its bioactive molecules are effective in controlling the extent of colorectal, gastric, ovarian, liver, skin, breast, and prostate cancers.

This benefit is mostly because you’re taking your ginger in water. Staying hydrated is very important for supporting every aspect of your health. Many of us simply don’t drink enough water each day. Starting your day with a glass of ginger water, or finding another regular time to drink one each day, will help you hydrate. Colorectal cancer is more prevalent in vegetarians and ginger could be effective in reducing the extent of this disease. Manju and Nalini studied the efficacy of ginger against 1, 2 dimethylhydrazine (DMH)-induced colon cancer. They observed that ginger supplementation can activate various enzymes such as glutathione peroxidase, glutathione-S-transferase, and glutathione reductase and suppress colon carcinogenesis. Kim et al. administered Zerumbone orally in mouse models and observed inhibition in multiplicity of colonic adenocarcinomas through suppression of colonic inflammation in a dose-dependent manner. The mechanism of that includes inhibition of proliferation, induction of apoptosis, and suppression of NF-κB and heme oxygenase (HO)-1 expression.

Nutrition Ginger is a good source of antioxidants, but it does not provide many vitamins, minerals, or calories. According to the United States Department of Agriculture, 2 teaspoons of ginger provide only 4 calories, this quantity does not provide a significant amount of any nutrient. Protects Against Disease Ginger is loaded with antioxidants, compounds that prevent stress and damage to your body’s DNA. They may help your body fight off chronic diseases like high blood pressure, heart disease, and diseases of the lungs, plus promote healthy aging. Conclusions: The anticancer potential of ginger is well documented and its functional ingredients like gingerols, shogaol, and paradols are the valuable ingredients which can prevent various cancers. This review concludes to favor ginger but some ambiguities necessitate further research before claiming its efficacy.

We are here to help you with your alternative needs, and Frequency healing.