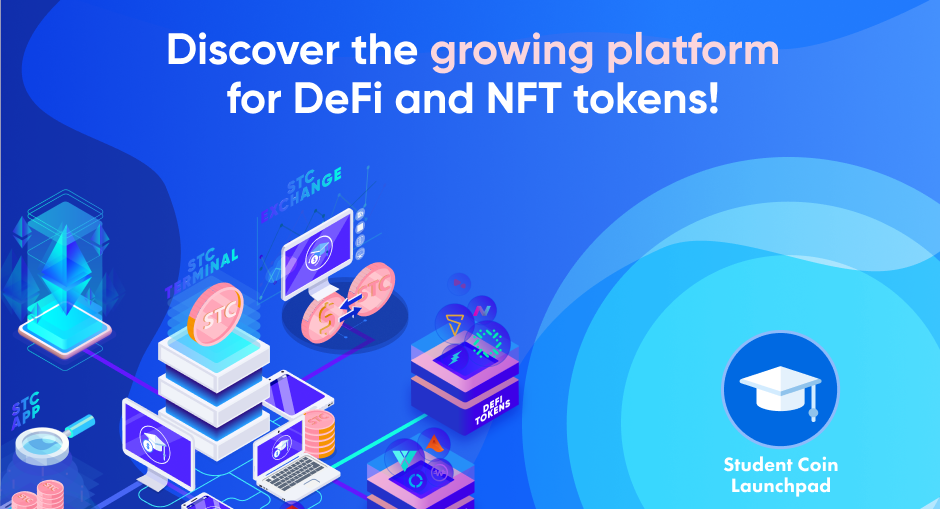 Who is Student Coint – STC

We allow for wide scale tokenisation by building the platform for both people and organisations to easily create, manage and develop their own tokens.

“Tokenisation” is the future of the economy, where every person and company has its own token. Student Coin allows the creation of custom tokens and can be used for crowdfunding, trading, governing, voting or payments.

The tokens built with Student Coin are valued based on the central reference currency, STC Token, and can be traded and crowdfunded at the Student Coin’s platform, STC Exchange.

DeFi tokens issued by students to decentralise their student loans is one example of how STC-based tokens can be used.

The aim of the project is to put the tokens and blockchain into the mainstream- Student Coin is a first platform that allows to perform the wide-scale tokenization for people, organizations, corporations, startups and decentralized finances (DeFi). The wide-scale tokenization is a process that needs an easy-to-use and universal ecosystem that is constructed by the Student Coin. With the STC ecosystem everyone will be able to easily create any kind of token and develop it in the long run. Student Coin will allow for tokenizing people, firms and organizations, as well as, manage token utilities, perform crowdfunding and easily list new projects.

University is an environment for innovation, new technology research, and the source of great ideas. Moreover, universities around the world are now more connected than ever before and have a lot of external value transfers. Finally, the global educational market is one of the fastest-growing sectors, creating a great environment to build disruptive blockchain-based solutions such as the Student Coin. These three factors made universities a perfect place to create the first wide-scale tokenization platform, similar to how the Internet and social media began.

Student Coin is also the first cryptocurrency directly related to the network of universities that helps in promoting the blockchain values and building the big international community. The Student Coin is run by students, faculties, and entrepreneurs from over 20 universities, including the Kozminski University, New York University, Harvard University, Stanford University, University of Oxford, London School of Economics and the Imperial College London.

One of the biggest problems of the Student Coin is the way it is sold. Because it is sold to the public and the official website literally says that the coin will earn you dividends and that it represents shares of other tokens. Again, we are not lawyers, but in our opinion this makes the Student Coin (STC) a security.

When you sell something that represents a share in anything valuable and will earn you dividends thanks to managerial efforts of others, it is a security in every major jurisdiction (EU, USA, Canada, Australia, Japan, etc.) we can think of.

And securities offerings are heavily regulated, you need authorizations from financial regulators in every country you want to sell your security in.

But Student Coin has not been registered anywhere in the world as a security, so we believe it’s ICO is an unauthorized security offering. There is a great danger that regulators will come after it and shut it down.

We are aware that Student Coin is saying that their cryptocurrency is not a security, they base their claim on a legal opinion from a lawyer. But when you study that document carefully, the disclaimer says that the lawyer has not looked at any materials about STC, he has not studied it himself, he just answered questions based on facts stated by Student Coin.

And, as you can see in our picture, Student Coin provided the lawyer with statements that are factually wrong, because they said STC is just a utility coin. Which it is not, because on their website they say it will earn you dividends and it will represent a share in other tokens.

Since the lawyer was provided with wrong facts, his conclusion has no weight at all. In reality, STC has all the hallmarks of a security.

If you are considering investing in Student Coin, we strongly recommend contacting your national financial regulator and consult this project with them.